Electromagnetic phenomena are all around us and is little understood by many in industry, we present here a brief synopsis of the potential sources of EMI and simple ways used to overcome their effects

Radiated EMI or RFI may be broadly categorized into two types; narrowband and broadband. 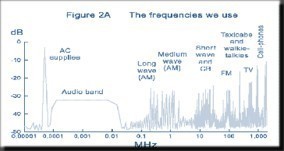 Anywhere electrical power is being turned off and on rapidly is a potential source.

The spectra of these sources generally resembles that of synchrotron sources, stronger at low frequencies and diminishing at higher frequencies, though this noise is often modulated, or varied, by the creating device in some way.

Included in this category are computers and other digital equipment as well as televisions.

The rich harmonic content of these devices means that they can interfere over a very broad spectrum.

Characteristic of broadband RFI is an inability to filter it effectively once it has entered the receiver chain. 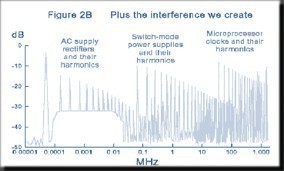 Electromagnetic disturbances in the EM field of a conductor will no longer be confined to the surface of the conductor and will radiate away from it.

This persists in all conductors and mutual inductance between two radiated electromagnetic fields will result in EMI.

Integrated circuits are often a source of EMI, but they are never the "antenna" (the heat dissipation device).

They must couple their energy to larger objects such as heat-sinks, circuit board planes and cables to radiate significantly.

On integrated circuits, important means of reducing EMI are: the use of bypass or "decoupling" capacitors on each active device (connected across the power supply, as close to the device as possible), rise time control of high-speed signals using series resistors, and voltage filtering.

Shielding is usually a last resort after other techniques have failed because of the added expense of RF gaskets and the like.

The efficiency of the radiation depends on the height above the ground plane or power plane (at RF one is as good as the other) and the length of the conductor in relation to the wavelength of the signal component (fundamental frequency, harmonic or transient (overshoot, undershoot or ringing)).

Since the noise is common-mode, shielding has very little effect, even with differential pairs. The RF energy is capacitively coupled from the signal pair to the shield and the shield itself does the radiating. One cure for this is to use a braid-breaker or choke to reduce the common-mode signal.

At higher frequencies, usually above 500 MHz, traces get electrically longer and higher above the plane. Two techniques are used at these frequencies: wave shaping with series resistors and embedding the traces between the two planes. If all these measures still leave too much EMI, shielding such as RF gaskets and copper tape can be used. Most digital equipment is designed with metal, or conductive-coated plastic, cases.

Interference tends to be more troublesome with older radio technologies such as analogue amplitude modulation, which have no way of distinguishing unwanted in-band signals from the intended signal, and the omni-directional dipole antennas used with broadcast systems. Newer radio systems incorporate several improvements that improve the selectivity.

The most extreme example of digital spread-spectrum signalling to date is ultra-wideband (UWB), which proposes the use of large sections of the radio spectrum at low amplitudes to transmit high-bandwidth digital data. UWB, if used exclusively, would enable very efficient use of the spectrum, but users of non-UWB technology are not yet prepared to share the spectrum with the new system because of the interference it would cause to their receivers.

Complex electronic circuitry is found in all sorts of devices used in the home. This results in a vast interference potential that didn't exist in earlier, simpler decades. In the US, Public Law 97-259, enacted in 1982, gave the FCC the authority to regulate the susceptibility of consumer electronic equipment sold in the United States.

The FCC, working with equipment manufacturers, decided to allow them to develop standards for EMI immunity and implement their own voluntary compliance programs.

Other possible sources of interference include a wide variety of devices, such as doorbell transformers, toaster ovens, electric blankets, ultrasonic pest control devices, electric bug zappers, heating pads, and touch controlled lamps. Multiple CRT computer monitors or televisions sitting too close to one another can sometimes cause a "shimmy" effect in each another, due to the electromagnetic nature of their picture tubes, especially when one of their de-gaussing coils is activated.

Switching inductive loads, such as electric motors, often cause interference, but it is easily suppressed by connecting a snubber network, a resistor in series with a capacitor, across the switch. Exact values can be optimised for each case, but 100 ohms in series with 100 nano-farads is usually satisfactory.

Switched-mode power supply can be a source of EMI, but have become less of a problem as design techniques have improved, such as integrated power factor correction.

Most countries have legal requirements that mandate electromagnetic compatibility: electronic and electrical hardware must still work correctly when subjected to certain amounts of EMI, and should not emit EMI which could interfere with other equipment (such as radios).

×
CE Mark Consultancy is the trading name of CE Mark Technical Services Ltd. Registered in England No: 12389827.
Back to content